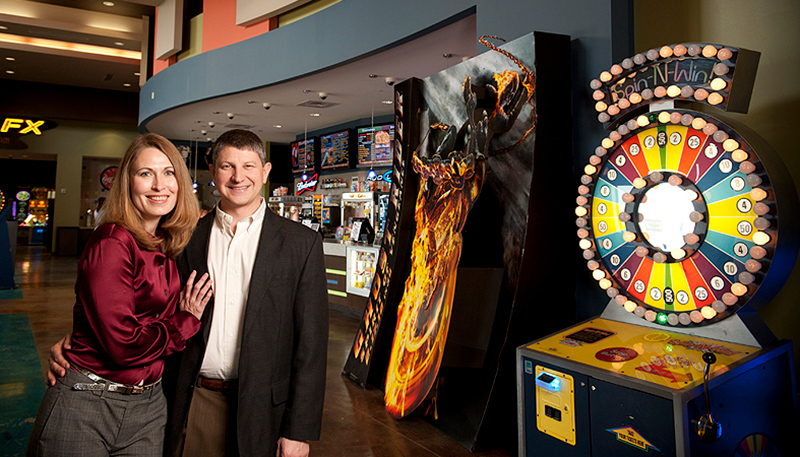 After selling their Movie Tavern theater brand in 2008, entrepreneurial power couple, Jeff and Jamie Benson turned once again to John Hart and GTCC to finance the opening of the first of four Cinergy Cinemas locations. Greater Texas Capital Corporation had first assisted the Bensons with another real estate deal back in 2002 and they had been pleased with the experience.

Cinergy Cinemas movie eateries and entertainment complexes are unlike anything seen before – the atrium ceiling is the site of an intricate ropes course, with bridges and platforms that overlook the crowds below. From the bar and dining area at the edge of the bowling alley, you can see a thin haze spilling onto the floor of the custom-built laser tag arena whose display of LED lights and futuristic design look like a set piece ripped from one of Cinergy’s giant movie screens.

Opening multiple Cinergy locations was a huge undertaking that required large financial backing for construction, equipment, and real estate. After trying out a multitude of financial backers in the past, the Bensons decided that GTCC President John Hart would be the man to help them break ground at their first location in Copperas Cove, Texas. Since then, Cinergy Cinemas has been a tremendous boon for the local economies of several other Texas towns, employing hundreds of people and serving as an attractive source of revenue for the cities that they serve.

“GTCC has been very easy to work with on all of the loans they have helped us with. We would not be here today without John Hart and Greater Texas Capital Corporation. They knew what we needed and found a bank that was the very best fit for us.”